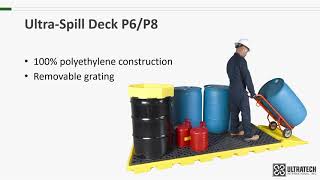 Hello and welcome to another product training session. Today, we are talking about the Ultra-Spill Deck P6 and P8.

As the name implies, these are spill containment decks designed for a quantity of six or eight 55-gallon drums.

These spill decks were developed after the original Ultra-Spill Decks were introduced and some users didn’t want to mess with assembling multiple decks.

For those folks, the simplicity of a single containment sump was more appealing than the flexibility of the modular version.

Meets EPA and SPCC regulations. There is a link below to a video that explains the EPA regulation in further detail if you would like to learn more.

The spill decks are made with 100% polyethylene and are rotationally molded at our factory in Ohio. Polyethylene has outstanding chemical compatibility and will not rust or corrode.

Heavy-duty, removable grating is used to hold the drums above the containment area. The P6 uses 3 pieces of grating, while the P8 uses 4. All of it is quickly and easily removed for inspection or clean-up.

There is also an optional ramp as you can see in the picture. The ramp clips onto the side of the deck and makes loading and unloading much easier.

Typical applications for the Ultra-Spill Deck P6 and P8 are likely to be indoor and can include manufacturing, warehousing, chemical processing, property management, auto service, and any number of industries where 55-gallon drums are used or stored.

What else do you need to know? Well, you should probably know that the P6 and P8 are NOT compatible with other Ultra-Spill Decks. In other words, they cannot be connected to other decks. They are designed as “stand-alone” spill containment.

So why would you choose the P6 or P8 over one of our other Ultra-Spill Decks or spill pallets? As I mentioned, it’s probably going to be because of the simplicity. If you want a low-profile spill containment system and don’t want to bother with bulkhead fitting or t-strips or connecting multiple decks, the P6 and P8 are a great choice.

Why wouldn’t you choose the P6 and P8?

Well, it’s got a large footprint and, unlike the other spill decks, there is no option to disassemble it into smaller, more manageable components for shipping or storage.

They are not forkliftable. Now, NONE of our spill decks are forkliftable but if you are also considering spill pallets, which can be moved with forklifts or pallet jacks, that could be the deciding factor.

Lastly, you could make the argument that these decks are not as versatile as our other decks. Because of the modular design of the other decks, they can be connected to each other in a multitude of different ways. Different shapes, different configurations, it’s almost limitless. But since, as I mentioned earlier, the P6 and P8 canNOT be connected to other decks, you are limited to a stand-alone spill containment unit for 6 drums or 8 drums. Depending on your application, that may suit you just fine.

Other products to consider if you’re taking a look at the Ultra-Spill Deck P6 and P8? Of course, there’s the standard spill decks which will do the same thing but don’t have the single-piece sump. There’s also our inline spill decks which provide containment for multiple drums in a single row. For heavy-duty applications, we have the spill deck plus models which are capable of holding much greater weights. There are number of spill pallet options available as well. None of them are capable of containing 6 or 8 drums but if you’re willing to divide your drums up, that an option worth looking at. And finally, our Ultra-Containment Berms are a very versatile product that can be used to contain 55-gallon drums among many other things.

Thank you for your time. Look for more product training videos on our YouTube channel.

All About Oil Spill Containment Booms